The Total Look is the Total Package for Fashion Enthusiasts 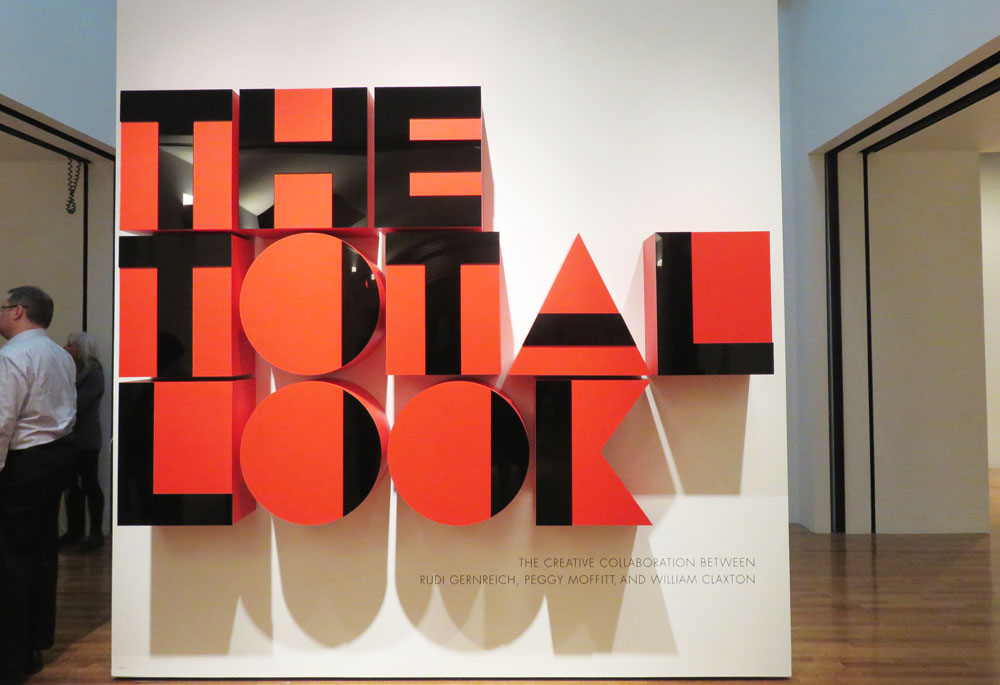 For lovers of fashion and history, the Cincinnati Art Museum’s Rudi Gernreich retrospective is a dream come true, especially if your dreams are a cross between a swinging ‘60s dance party, a fashion magazine editorial, and a passionate women’s rights rally. Yes? Well then, welcome to The Total Look.

The Total Look focuses on Gernreich’s work throughout his career, which was heavily influenced by feminism and his collaboration with model and muse Peggy Moffitt (whose archive supplied most of the pieces in the exhibit) and photographer William Claxton. “He was about sociological statements,” asserts Cynthia Amneus, Curator of Fashion Arts and Textiles at the museum. “He was keyed into what was going on in the 1960s, the cultural changes that were happening, and speaking to that in his work.” 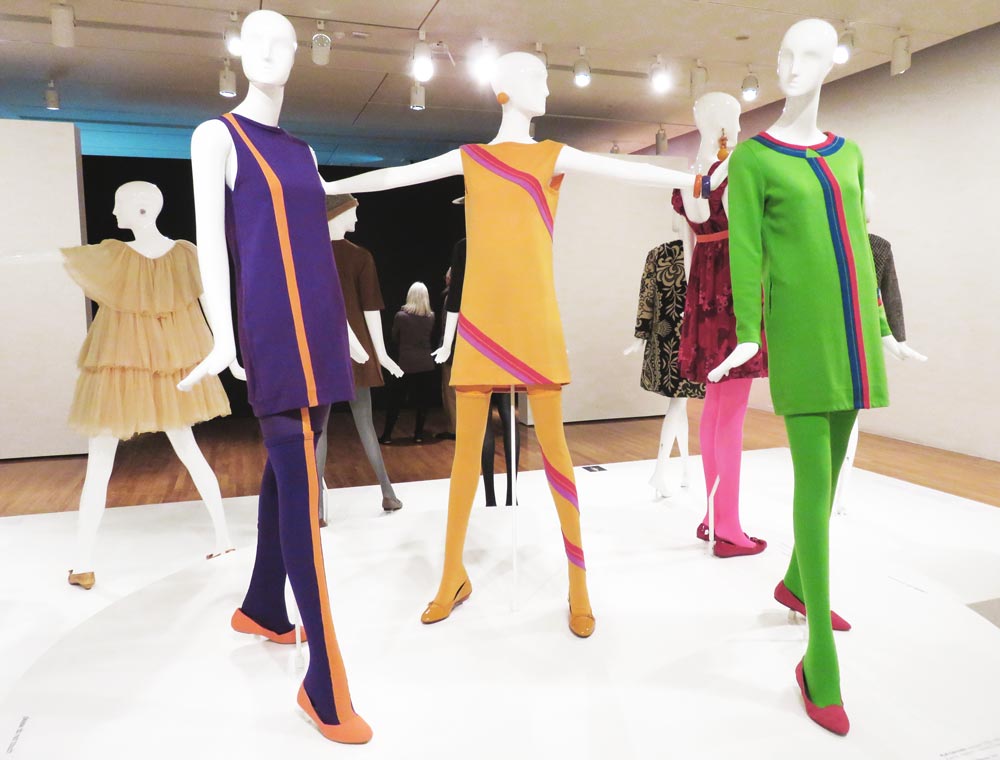 The Collection
At the entrance of the exhibition, sixties-style graphic white and red lettering infuses the space with a sense of gravity and playfulness. A glance to the left reveals a series of mannequins done up in animal print layers, which include matching dresses, pants, tights, even underwear. It’s called The Total Look for a reason: “He designed from head to toe with the intent of unifying the body,” says Amneus.
“Basic Black”, an artistic video created by Claxton in 1967 and widely credited as the first ever fashion video, features Moffitt and two other models cavorting around in the animal print pieces on display a few feet away. The juxtaposition makes the connection between the past and present more tangible, like you could jump into the video and join the party at any moment.

Beyond the theater, the space opens up to reveal Gernreich’s early work, structured wools and tweeds in neutral colors, heavily influenced by American designers Bonnie Cashin and Claire McCardell. There are several extremely modern looks, including a street style-worthy sleeveless vest and a bodycon dress with cutouts I swear I saw at Saks last week. Fashion-wise I’m a ‘70s girl, but these pieces are extremely NOW. “If we look at modern fashion there is always, season after season, Gernreich’s influence,” points out Cameron Silver, founder of Decades and author of Decades: A Century of Fashion. “It all looks modern.” 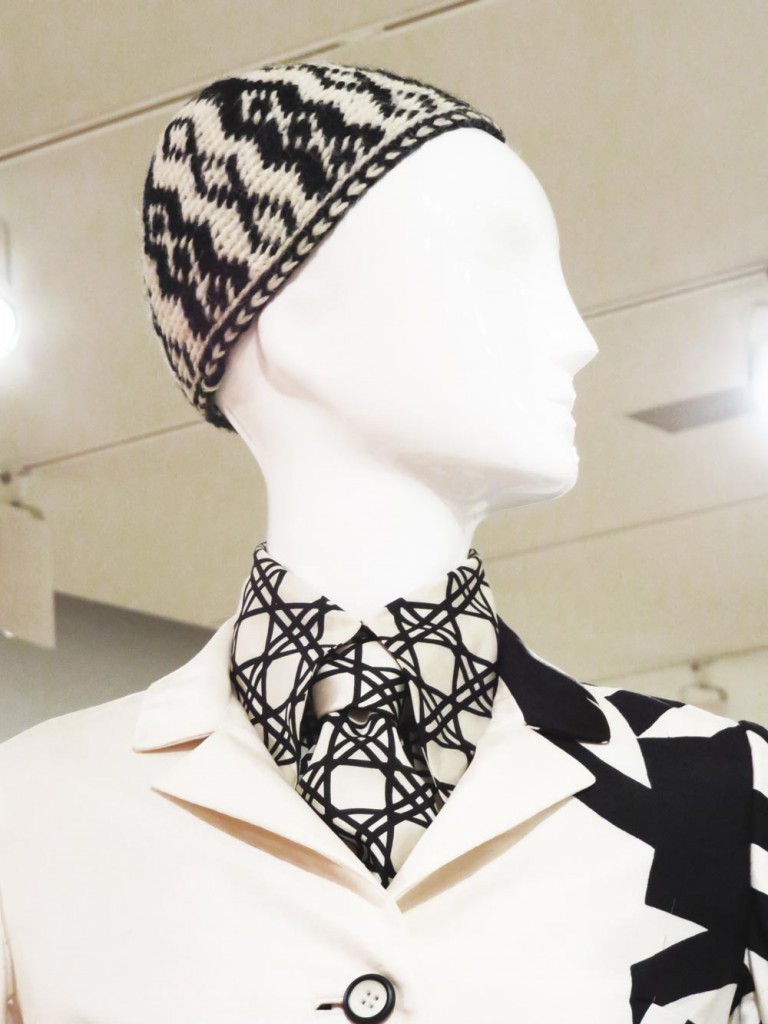 I will absolutely be wearing a matching shirt and tie at some point soon. 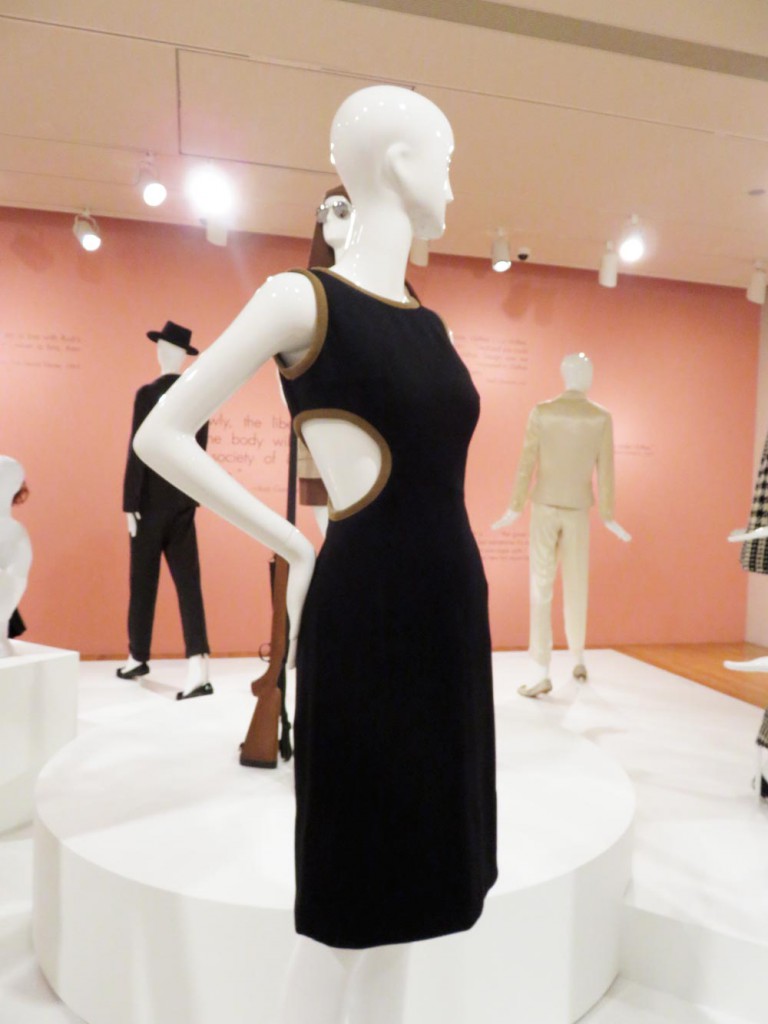 The colors, the cutouts…so modern.

The flip side of the display makes it clear how far Gernreich came into his own and carved out his signature style: the linear silhouettes and pops of color epitomize 1960s fashion, but he also created military looks (he sent models marching down the runway in dog tags and safari-style tunics in response to the Kent State shootings), menswear suits (another nod to women’s equality and the need for practical workplace fashion), and for those of us who detest underwires, the soft-cup No-Bra, no burning necessary. 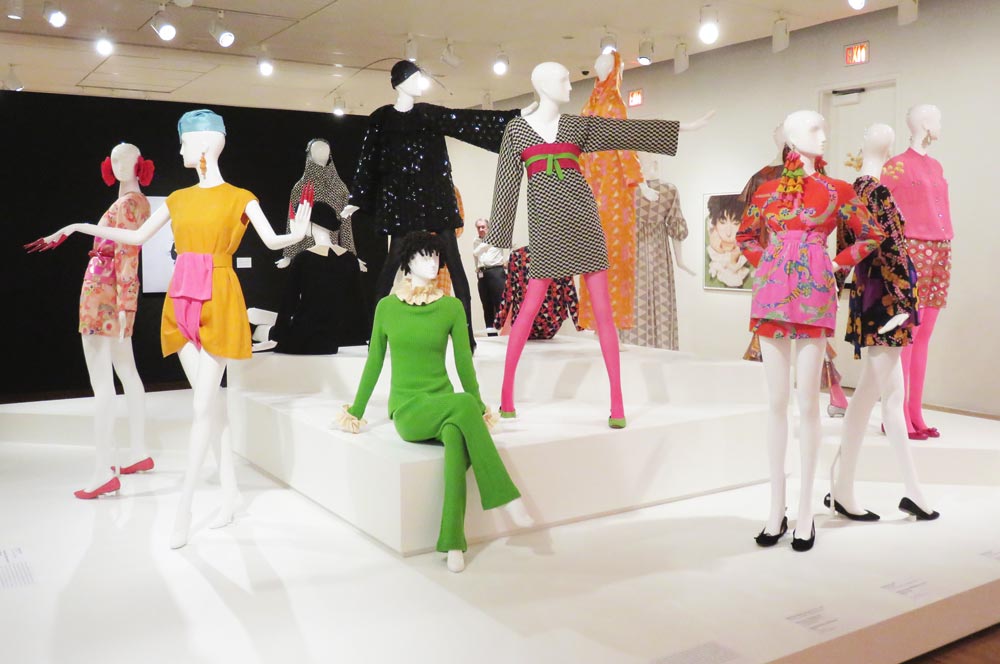 A Topless Bathing Suit? Really?
Interestingly enough, the piece Gernreich is most remembered for was originally conceived as an abstract idea that was never meant to be produced. The topless bathing suit (or monokini) is iconic, but it was intended to be a statement about women’s freedom, not a commercial product. However, a magazine editor asked him to produce a prototype for a photo shoot, and when it appeared in print, the orders started coming!
“The topless swimsuit really represents the end of constricted, corseted look of fashion,” notes Silver, pointing out that Gernreich was a pioneer who helped American fashion gain international significance. “He was such an innovator.” Approximately 3,000 of Gernreich’s monokinis were sold at $25 apiece, and the rest is history.

As his career progressed and he continued to collaborate with Moffitt and Claxton, his designs became more playful: a diaper-like one piece, a dress and apron inspired by the Far East shown with amazing waterfall earrings, a riff on a Japanese schoolboy uniform. It feels fun and lively, almost like a child playing dress-up with friends. “What this show really addresses is a magical collaboration that has never been replicated,” notes Silver. “Between the imagery, the artistry, and the design it’s quite phenomenal.” 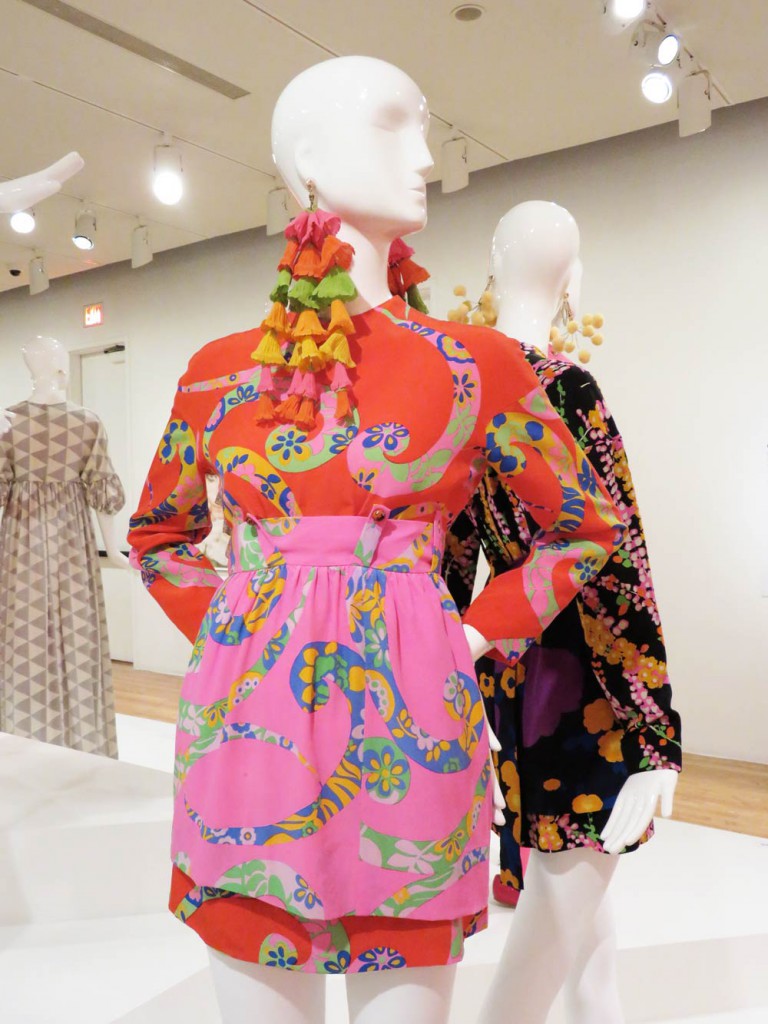 Of course, now I want to wear an apron over a minidress. 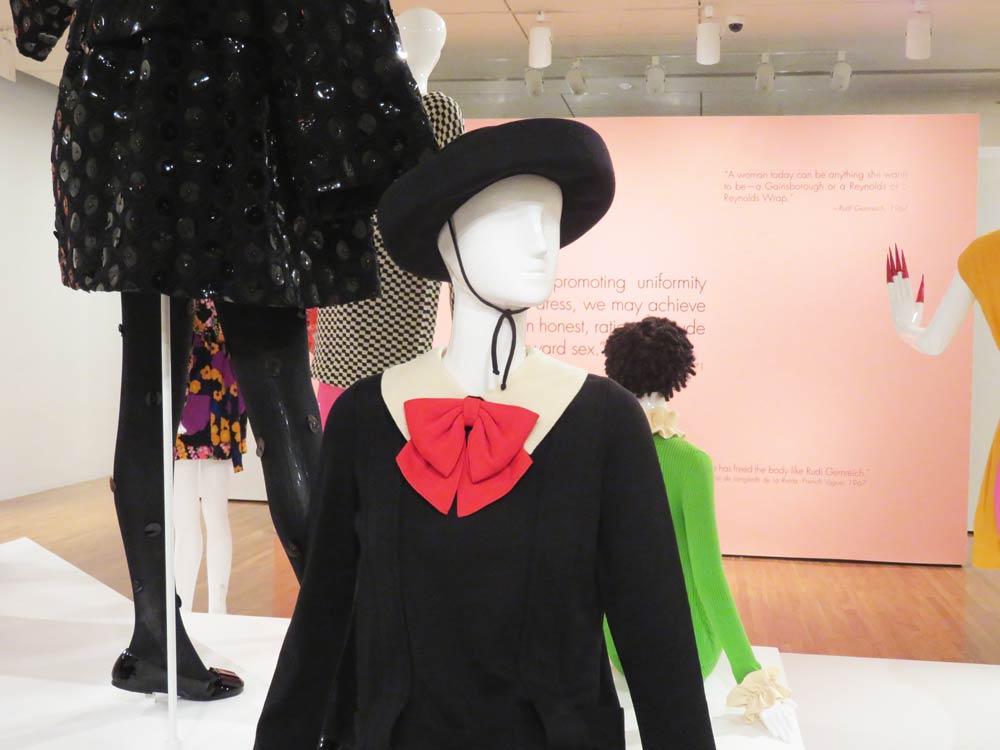 I have a vintage blouse similar to this! Time to dig it out of my closet.

Later in his design career, Gernreich started to produce more commercial styles, and sure enough, the critics were still all over him. “He was criticized for being too avant garde in the beginning, but towards the end of his career when he created more toned down, functional clothing they criticized him for being too tame,” says Amneus. Even so, his more mainstream designs still carried a touch of the old Rudi: a preppy shirt with an attached sweater that was a jab at Halston, a trompe l’oeil jumpsuit Miley Cyrus would definitely wear, and a collection of black jersey dresses that attached to the body with bold silver jewelry, which, again, looks perfectly modern. 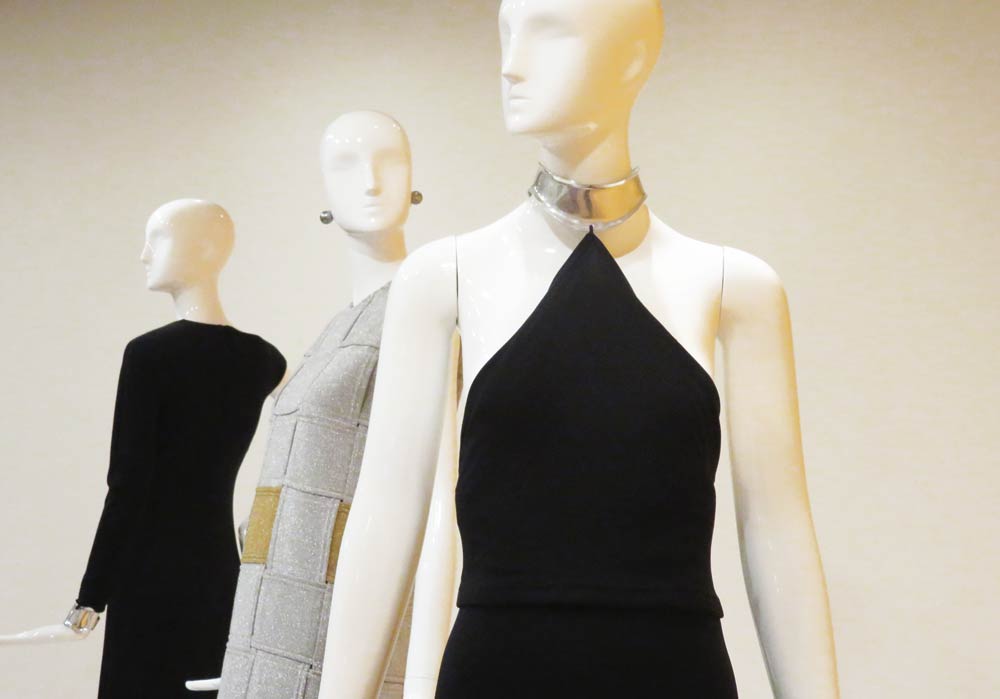 Um, I would wear this TODAY. If I had somewhere to go. 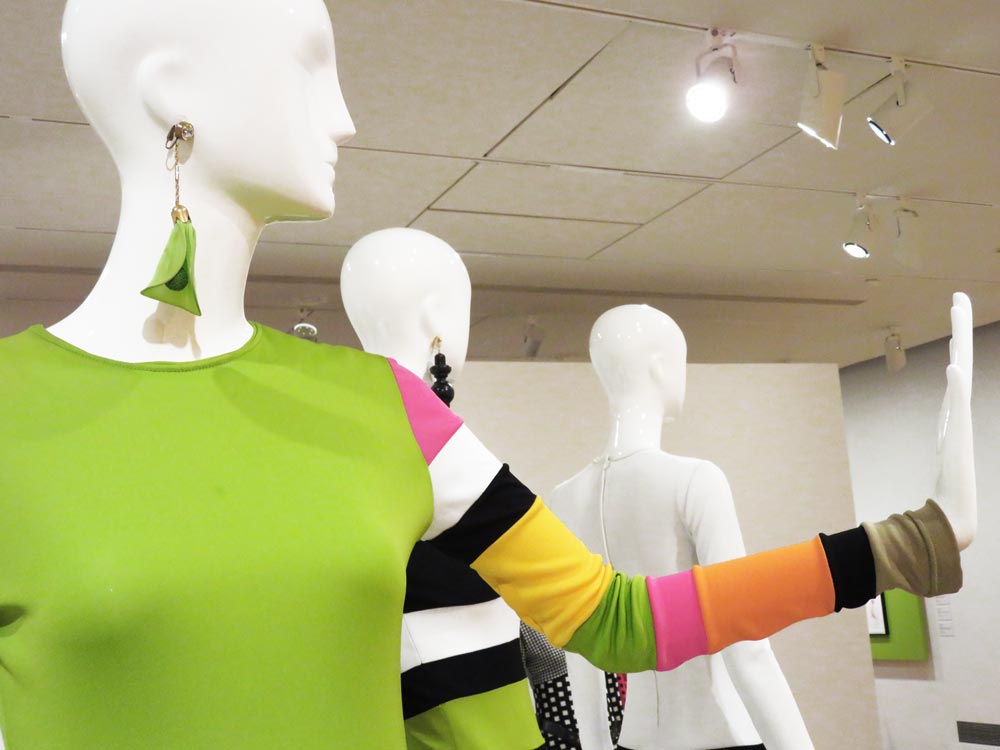 The exhibition is a walk through one designer’s fashion, yes, but also serves as surprisingly contemporary commentary on past and current culture. “He’s fascinating,” says Amneus. “That’s why I wanted to do this show. His clothes are amazing, but for me it’s the meat underneath it that so important. He’s saying some really important things that are still relevant today.”

The Total Look is at the Cincinnati Art Museum now through May 24, 2015. I highly recommend taking a guided tour and/or attending one (or all!) of the events surrounding the exhibition. 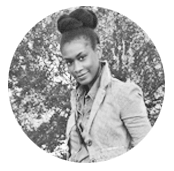 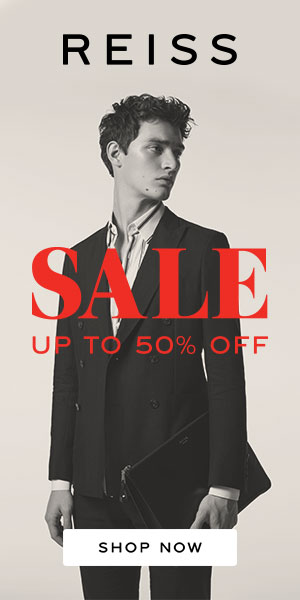 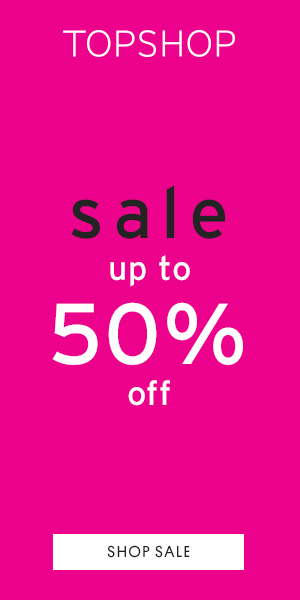